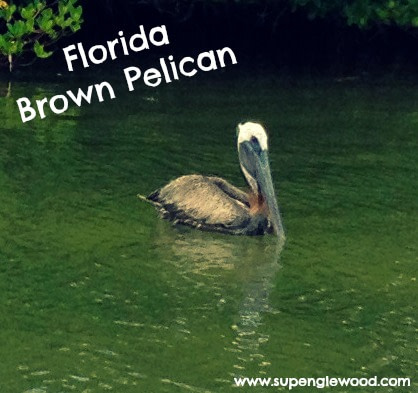 The Florida brown pelican, whose binomial name is Pelecanus Occidentalis, is prominently found at the Atlantic, Pacific and Gulf Coasts of North and South America. In Florida, brown pelicans are commonly found in trees on coastal islands in colonies. These colonies are generally most numerous on the coasts central and southern Florida. The Brown Pelican is the smallest amongst the eight other species of pelicans. It measures up to 54 inches long, weighs 8 to 10 pounds, and has a wingspan between 6-1/2 feet and 7-1/2 feet. It has a unique quality of feeding by diving into the water which differs it from the white pelicans which are surface feeders.

The brown pelican, like the other members of its species, is known to have a large bill which could be up to 28 to 34.8 cm long. The bill is of gray color in most birds but it turns a reddish shade in breeding birds. It has a thin neck, pale yellow eyes, black legs and feet, and an un-feathered, black throat pouch. Its head is white but usually gets yellow while the pelican ages. The back and tail are gray and dark brown. The breast and belly are a blackish-brown and the legs and feet are black in adult pelicans. The younger one is similar but has a brownish-gray neck and white under-parts. The Peruvian pelican was previously considered a sub-species of the brown pelican, but it is now considered a separate species. The brown pelican has smaller body size, duller plumage, and smaller crest which differentiates it from its previous sub-species. The brown pelican is very social and is usually seen in groups and colonies. These groups usually fly in a V-shape or in regular lines. It may seem to be clumsy on land, but has the ability to fly majestically with its necks folded and its heads resting on its back.

Previously the brown pelicans were considered as an endangered species, but now the gulf coast and Florida populations are now delisted. In the 19th century they were hunted and slaughtered by various fishermen. In 1903 President Theodore Roosevelt termed the Indian River Lagoon as Pelican Island. This protected the species from the threat of hunters. It was further protected by the Migratory Bird Treaty Act of 1918. Unfortunately the brown pelican was considered endangered again in the 20th century. Through research it was discovered that pesticides like DDT and dihedron caused the thinning of pelican eggshells and made it incapable of supporting the embryo to maturity. As a result, DDT was banned in Florida along with the rest of the US. However, the population of brown pelicans in Florida and the gulf coast did not suffer the catastrophic declines as compared to those experienced elsewhere. Florida Fish and Wildlife Conservation Commission has conducted surveys of Brown Pelican colonies annually from 1968 to 1983 and biannually from 1985 through 1995. As a result the Brown Pelican population has increased since 1968. The species is currently expanding its breeding range on both the Atlantic and Gulf coasts.

Successive efforts have been made to increase the population of the brown pelican. The International Union for Conservation of Nature’s Red List has listed the Brown Pelican as Least Concern since 1988. Migration plans of these birds have been plotted and data has been gathered on their lifespans and growth rates.