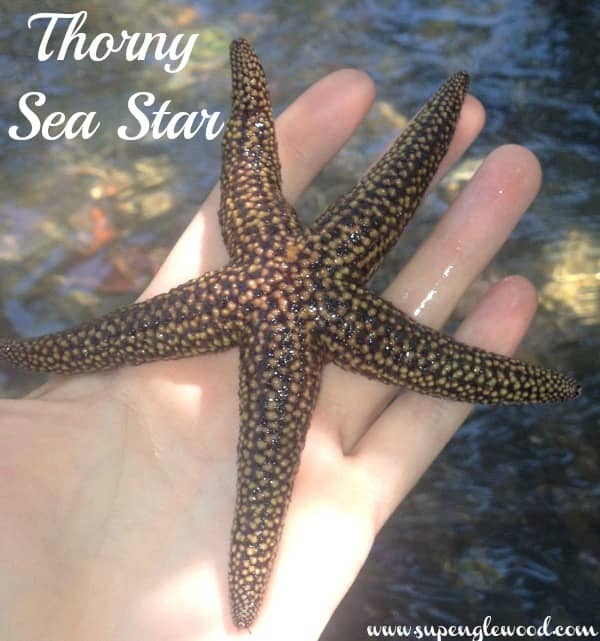 Sea Stars are not fish therefore marine scientists have replaced their common name “starfish”. They are a type of echinoderm, which are related to sea cucumbers, sea urchins and sand dollars. The five-arm sea star is the most common however there are over 2.000 species of sea stars in the world’s oceans.

Here in Southwest Florida the most common are the lined, nine-armed, and thorny sea star. These types are usually found in sandy shallows of the Gulf of Mexico or in seagrass. Sea Stars are not commonly found on the beaches however they are more likely to be spotted in inshore locations or by coral reefs in the gulf.

Sea Stars have a unique ability to regenerate however the degree depends on the species. Some require the center to be able to regenerate while others only need one-fifth of a limb. Most or all of their vital organs are located in their arms, which allow the sea stars to achieve regeneration.

At the center of a sea star is the madreporite, and this bright orange dot is an organ that pumps water into its body. Hundreds of tube feet located on the underside of the arms require the pumping for suction. The suction is used for feeding and movement.

Most sea stars rely on a diet of other live shells, muscles, conch, snails, as well as sponges and other small animals. The size of a sea star depends on the food it has consumed and not its age. Sea stars can be up to 12 inches in diameter.

Commercial collection and tourists shelling has reduced the number of sea stars, in Florida live shelling is prohibited to protect the living sea life. Other threats to sea stars are toxins in their environment. Natural threats such as crabs, fish, and sea gulls also prey on sea stars.

If you are looking for an area to view a sea star colony in natural form look into The Don Pedro Island State Park. This location can only be reached by boat, and there is a hidden area that can only be traveled to by paddle board or kayak. There is a mangrove tunnel that leads to a hidden lagoon inside the island. It is inside this mangrove tunnel pathway that a large colony of sea stars can be found.